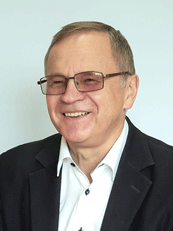 Dipl.-Phys., Patent and Trademark Attorney of the Republic of Belarus.

Born in 1953. In 1975 graduated from Minsk State Teaches Training Institute with the diploma in Physics. During three years was employed as a research worker at the Institute of Physics of the Belarusian Academy of Science.
Five years worked as an engineer at a repair yard. During the next five years was the Director of the Nautical School in Murmansk, Russia. Seven years worked as an engineer at a large electronic enterprise in Minsk. In 1996 graduated from Patent Training Courses. Co-author of several inventions. Employed in PAG since 1996. In 1998 was qualified as an Intellectual Property Lawyer after graduation from the Intellectual Property Training Courses of the Belarusian Patent Office. In 1999 was admitted as a Belarusian Patent Attorney (Reg. No.0074).